Saturday’s game against York City was a lot of fun.  It was a close game.  While we were in the lead at half time, York City came from behind and won 74-58.  We put up a good fight though.  With help from their blockers, Shenanigans and Slam I Am were each able to score double grand slams.  Boom earned MVP blocker and MVP Jammer went to Slam I Am. 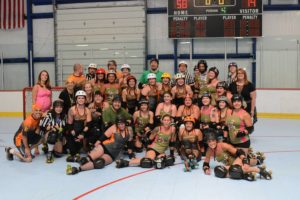