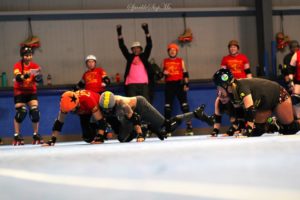 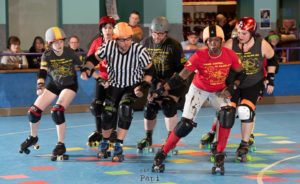 Picture taken by Pix by Papi 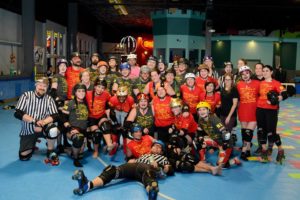 Crowd Control to Major Jam was a fundraising event to help Fire Storm Roller Derby get to MADE Nationals in Springfield, MO.  Through donations fans were able to control the action of the game.  This included putting skaters in the penalty box and buying points.  We saw skaters skating backwards and in the opposite direction.  Some of the sillier actions included making the refs jam, crawling, doing the chicken dance, and having Oderus and Chelsea Dagger hold hands while jamming.  In the end, whether by donations or skill, the Iggy Poppers won 122-100 against the Ziggy Stardusters.  MVPs were voted on by skaters.  Blaze and Carnage Asada’s speed and footwork earned them best jammers while Rhodey and Betty Rage received awards for their amazing blocking skills.